“Like colonialism, racism is violent, ongoing, and traumatic, and reaches everyone in some form, although it is still denied, uncomfortable to talk about and often creates anger and guilt… All people are various shades of brown. How can these variations in features add up to justifying discrimination and racism?” (Battiste, p. x)

“Few Canadians understand the cognitive operation of racism, how it came to be a dominant force in the history of Canada, and how it justified policies, practices, and outcomes that Canadians have come to accept as neutral and even just. Race helps Canadians to make sense of who they are and who they are not, where they have come from, and even where they are going. But the meaning of race is constructed from what we do, say, and think as a society.” (Battiste, p.x)

“Regardless of these constitutional protections of Aboriginal languages and the affirmation of the human right to languages, these concepts are basically the unexplored, suppressed territory in contemporary education, no longer considered as primitive as in colonization, but not yet understood as containing the vast knowledge systems of this continent and its ecosystems and beyond.” (Battiste, p.x)

Unike other topics, I was unable to find any localized educational resources relating to racism in the Northwest Territories. (The NWT Human Right Commission does have a Teachers Toolkit, but it appears to have originated in Alberta and not to have undergone any type of localization.)

Searching for racism among or impacting Inuvialuit, I found a series of articles relating to the cruel impacts of racism within the health care system. Beside the article with Alika Lafontaine a series of “Related Stories” pointed to a series of other similar events affecting Indigenous people across the North and beyond. 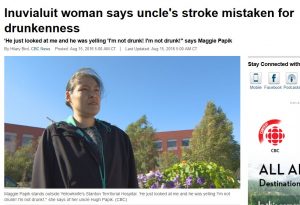 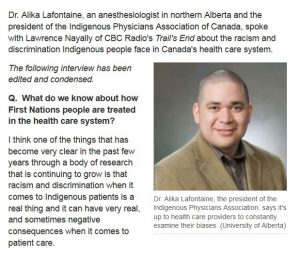